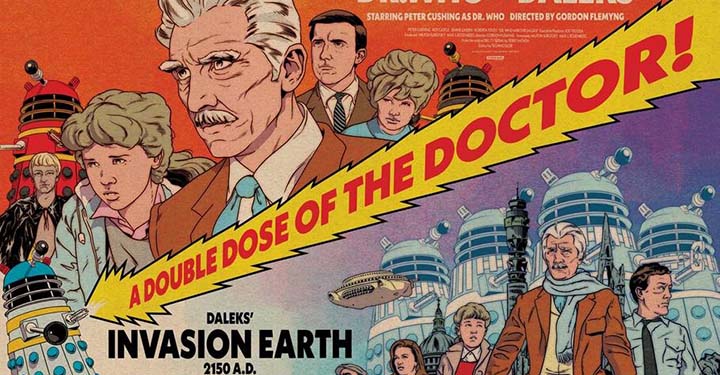 Lovingly restored and remastered this double bill of classics features the legendary Peter Cushing as everyone’s favourite timelord alongside a cast including Roy Castle, Bernard Cribbins, Jennie Linden and Roberta Tovey. These films shot in glorious Technicolor, are to date the only big-screen outings for the Doctor – a must-see for Doctor Who and sci-fi fans!

Dr. Who & The Daleks was the first big screen film adaptation of British TV’s most iconic sci-fi hero, and the first time Doctor Who was ever seen in colour. Having invented the TARDIS, a strange machine capable of travelling into other dimensions, the Doctor and his three young accomplices set forth on a quest through time and space. Their journey takes them into the dark, undiscovered depths of the universe and to the planet of Skaro, a primitive world devastated by nuclear war and populated by two warring species, a peaceful tribe known as Thals and a life form heavily mutated by radiation, encased in protective machines, a merciless force of destruction known as The Daleks!

The second film, Daleks’ Invasion Earth 2150 A.D sees Cushing return to the big screen – the future of Planet Earth now belongs to The Daleks, but deep within the London Underground a group of resistance freedom fighters are planning an attack.  Can The Doctor help them succeed in destroying their extra-terrestrial enemies and take back control of Earth?

To book tickets and find out about this and other events please visit Number 8’s website.