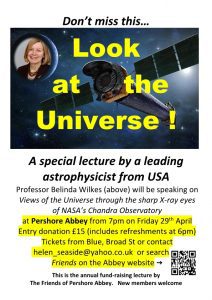 Look at the Universe! Annual fund-raising lecture for Pershore Abbey

The Friends of Pershore Abbey are delighted to announce that Dr. Belinda Wilkes, Director of the Chandra X-Ray Center & Senior Astrophysicist at the Smithsonian Astrophysical Observatory has agreed to deliver the Friends Memorial Lecture. The title of the talk is: “Views of the Universe through the sharp X-ray eyes of NASA’s Chandra X-Ray Observatory”.

This once in a lifetime opportunity to hear such an eminent British scientist will take place in Pershore Abbey at: 6.00pm for the pre-talk reception and 7.00pm for the lecture on 29th April 2022.

NASA’s Chandra X-ray Observatory was launched on 23 July 1999 by the Space Shuttle Columbia. Now in its 22nd year of operations, Chandra continues to be an indispensable tool for expanding the frontiers of knowledge throughout astrophysics. Chandra’s uniquely high (sub-arcsec) spatial, and spectral resolution have facilitated the deepest and sharpest images of the X-ray sky and the highest quality X-ray spectra to date. Its broad capabilities allow continuous expansion of its science based on new discoveries and facilities , e.g. the Event Horizon Telescope, NASA/ESA’s JWST (“Webb”, launched 25 Dec 2021). I will review Chandra’s launch and unique capabilities, and take us on a tour of some of the most spectacular discoveries across the whole range of celestial sources. These include the birth and death of stars, super-massive black holes, the first quasars, clusters of galaxies, dark matter, merging neutron stars, and more.

Dr. Belinda Wilkes is a Senior Astrophysicist at the Center for Astrophysics  Harvard & Smithsonian. She served as Director of the Chandra X-ray Center, which operates NASA’s Chandra X-ray Observatory on contract with NASA. She is currently a Royal Society Wolfson Visiting Fellow at the School of Physics, University of Bristol.

Tickets are available from Blue,Broad Street or contact us via email.

For more information about this event and other events organised by The Friends of Pershore Abbey visit the Abbey website.