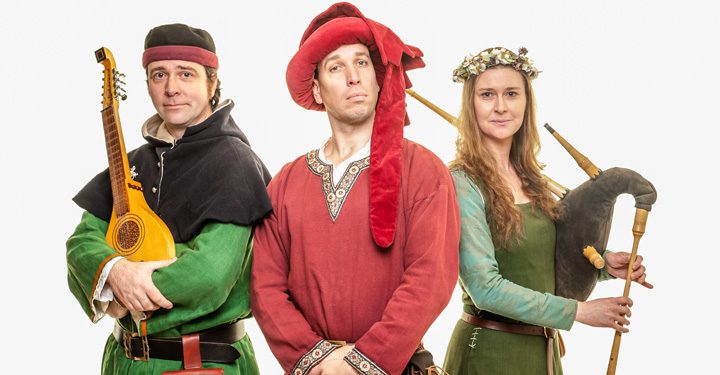 The Canterbury Tales at Number 8, Pershore

GreenMatthews presents The Canterbury Tales
Written in the late 14th century, The Canterbury Tales is the high-water mark of medieval English literature. Based around the concept of a disparate group of pilgrims to the shrine of Thomas à Becket at Canterbury Cathedral who tell each other stories to while away the journey, it paints a rich and vibrant portrait of life in medieval England. All human life is present – from the dark and brooding Pardoner’s Tale to the bawdy Miller’s Tale, via the proto-feminism of the Wife of Bath’s Tale and the simple whimsy of the Nun’s Priest’s Tale. Although Chaucer wrote his masterwork over 600 years ago, it still feels contemporary, fresh and vital – and wholly accessible to modern audiences.

GreenMatthews present six of the best-loved tales, told in a variety of styles. Taking visual inspiration from medieval mystery plays and complete with a touring set which has been specially constructed to resemble a medieval travelling theatre, the three-man cast use drama, verse, physical theatre and song to bring Chaucer’s characters to riotous life, telling tales packed with colourful characters and strange situations.  This is definitely not a dry academic take on English literature – the show is fast, furious, occasionally filthy and invariably funny!