There has been a settlement in Pershore since the iron age and evidence has also been found of Roman occupation. The Town is renowned for its Georgian architecture and many of the buildings along Bridge Street and Broad Street are listed with Perrot House being a Grade 1. However the oldest building standing in the town is the Abbey which stands majestically within the Abbey Park. It was founded in 689AD by St Oswald with the majority of the Norman building being built during the 11th century. Although only the quire of the original building now remains, it is regularly used for worship with a variety of concerts taking place throughout the year. The Abbey holds a fascinating collection of stained glass, ancient stonework and monuments as well as a unique bell ringing platform, suspended in the tower.

Why not book a history tour or tower tour to view Pershore from above and explore areas of the Abbey not usually open to the public. 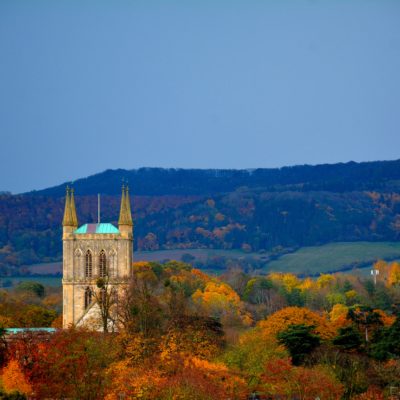 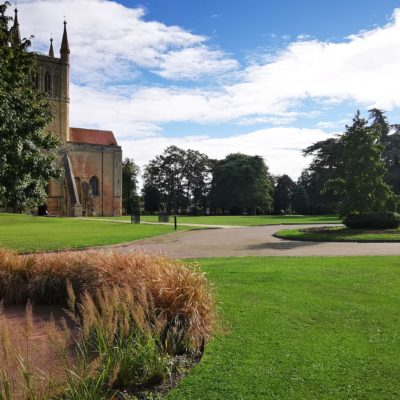 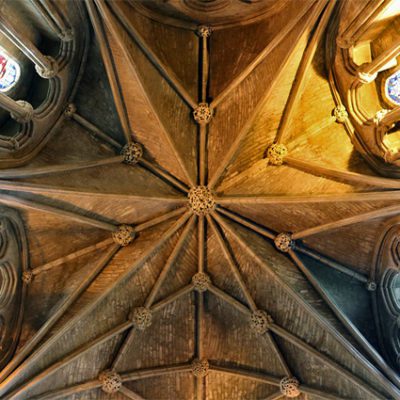 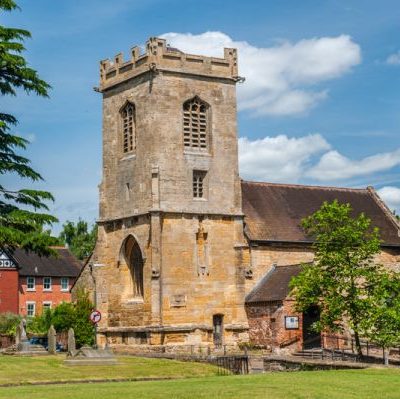 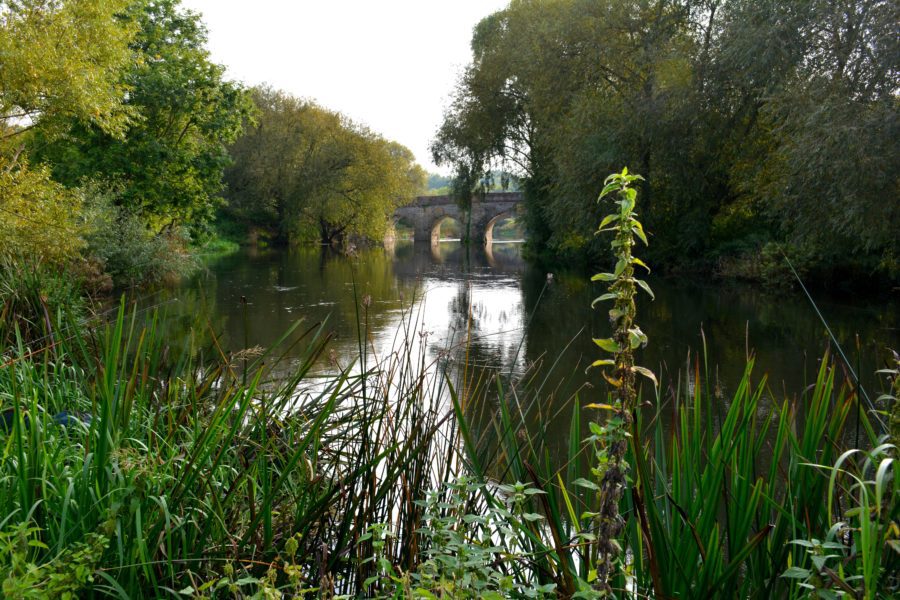 A few minutes walk from the town centre, is the old Pershore Bridge. This was the scene of Civil War skirmishes between the Roundheads and the Royalists. It is the only remaining monastic bridge over this stretch of the River Avon. Today, it is a more peaceful place, offering a riverside picnic area, and fishing (with facilities for disabled anglers).  There are moorings for pleasure craft, and many scenic walks start from this site. An ideal place to while away a summer’s day.
Pop into the Visitor Information Centre currently situated at the Town Hall to pick up a copy of ‘Pershore Bridges Circular Walk‘ – a 5 mile circular walk through the gorgeous countryside along the path of the River Avon, and taking in Tiddesley Wood.

Just outside the town is Tiddesley Wood – 185 acres of ancient woodland and home to herb Paris, small leaved lime and the wild service tree. This woodland dates back to the Ice Age and was mentioned in the Doomsday Book.
Tiddesley Wood is owned by Worcestershire Wildlife Trust and holds its open day in spring. There are local crafts, guided walks, live music and much more.
Free car parking available via Rebecca Road. Dogs welcome on a lead. 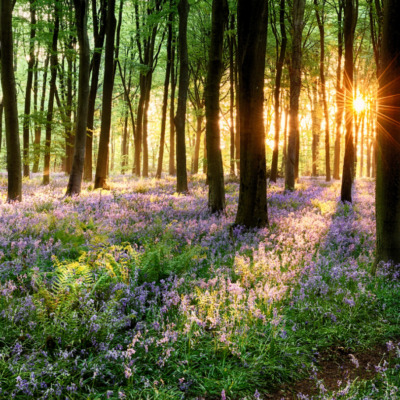 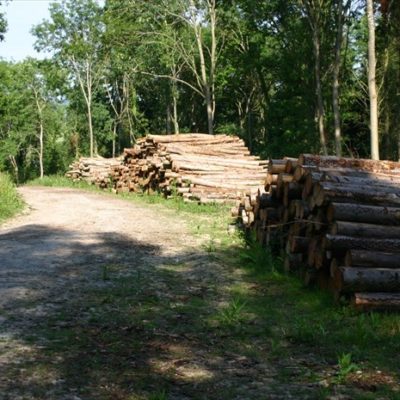 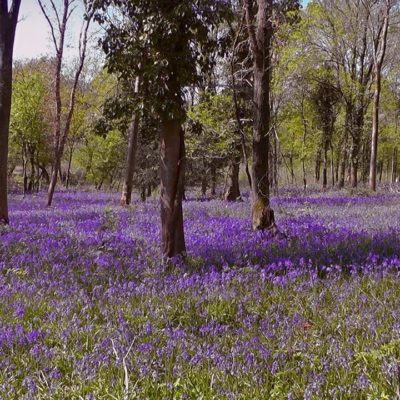 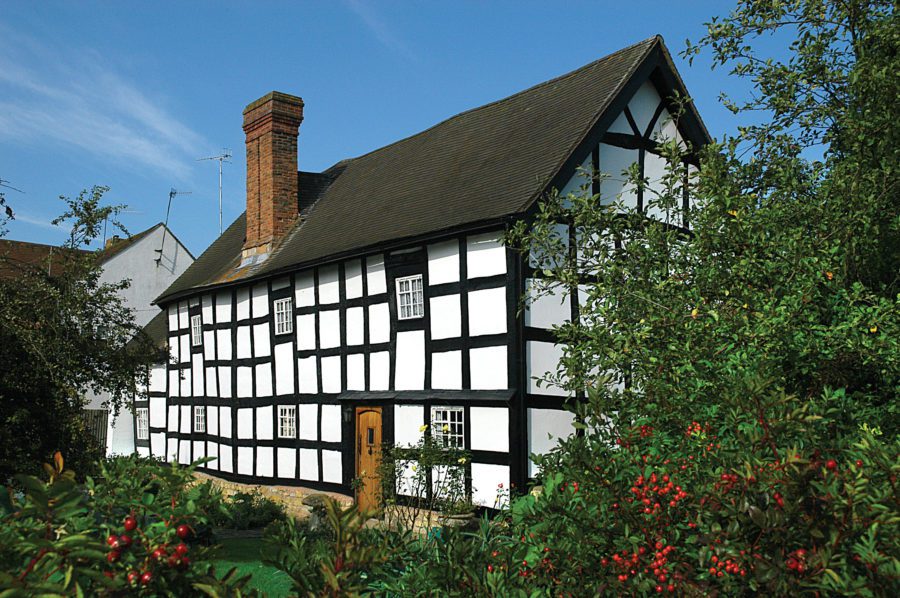 Take a stroll past the Abbey to The Almonry, situated in Newlands. This half timbered building which has been restored by the Worcestershire Historic Buildings Preservation Trust is thought to be situated on the site of the old Almonry, where the monks dispensed charity to the poor of Pershore and where their visitors were allowed to stay.

Pick up a copy of the Pershore Town Walk from the Visitor Information Centre and spend time wandering around the town.

Local historical facts can be found by visiting Pershore’s Heritage Centre, on the first floor of the Town Hall. Open from Easter until the end of October, the admission is free although donations are welcome. (Heritage centre currently closed due to Covid-19.)

In the wider area, Broadway Tower was the brainchild of the great 18th Century landscape designer, ‘Capability’ Brown. His vision was carried out for George William 6th Earl of Coventry with the help of renowned architect James Wyatt and completed in 1798. The location for the Tower was wisely chosen, a dramatic outlook on a pre-medieval trading route and beacon hill. Wyatt designed his “Saxon Tower” as an eccentric amalgamation of architectural components ranging from turrets, battlements and gargoyles to balconies. The Tower houses exhibitions on three floors about the history of its occupants and colourful past. Enjoy a leisurely climb of the Tower in manageable stages. The uses of Broadway Tower over the years were so varied and numerous that graphic displays on three floors have been dedicated to the colourful past of the building.

Why not take a trip into Worcester and visit Worcester Cathedral?
The Cathedral is a magnificent sight as it rises majestically above the River Severn. Worcester has been the seat of a bishopric since the Seventh Century, and the Cathedral was served by monks until the Reformation. St Oswald and St Wulfstan were among the bishops. Since the Eighteenth Century, the Cathedral has been famous for its part in the annual Three Choirs Festival, the oldest choral festival in existence.
Today the Cathedral is the centre of a vibrant community of clergy and laypeople, offering the praises of God each day, serving the city and diocese of Worcester, and attracting visitors from all over the world.

Not far from Pershore, there is much to see and do at nearby Croome Court, including a Visitor Centre, Museum, restored ‘Capability’ Brown parkland and Mansion House. Also at Croome Court, you will find the RAF Defford museum. The museum reveals the once secret story of RAF Defford with wartime artefacts, emotive personal possessions, videos and costume displays.
There are a number of National Trust and English Heritage properties in the area, visit the National Trust website for more details.

There are several other museums surrounding Pershore you may wish to visit. The Commandery and Porcelain Museum in Worcester, The Almonry in Evesham and the Heritage Centre and Salt museum in Droitwich. For information on more museums in the area, please contact us. 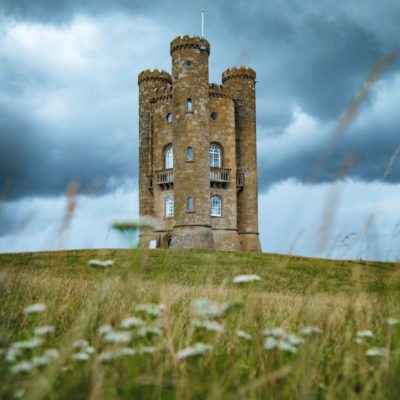 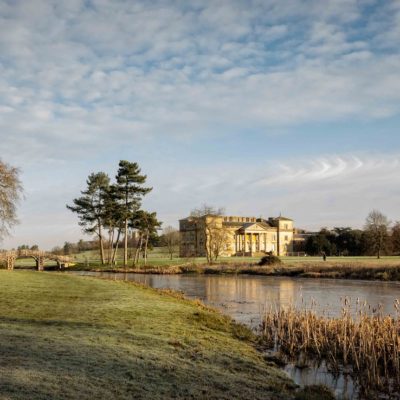 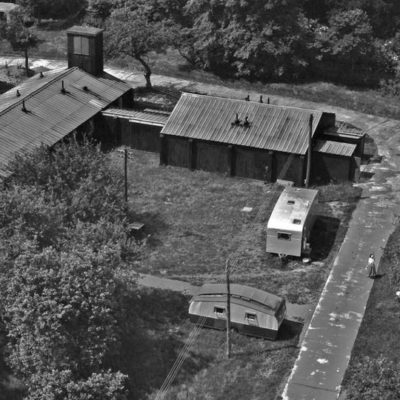